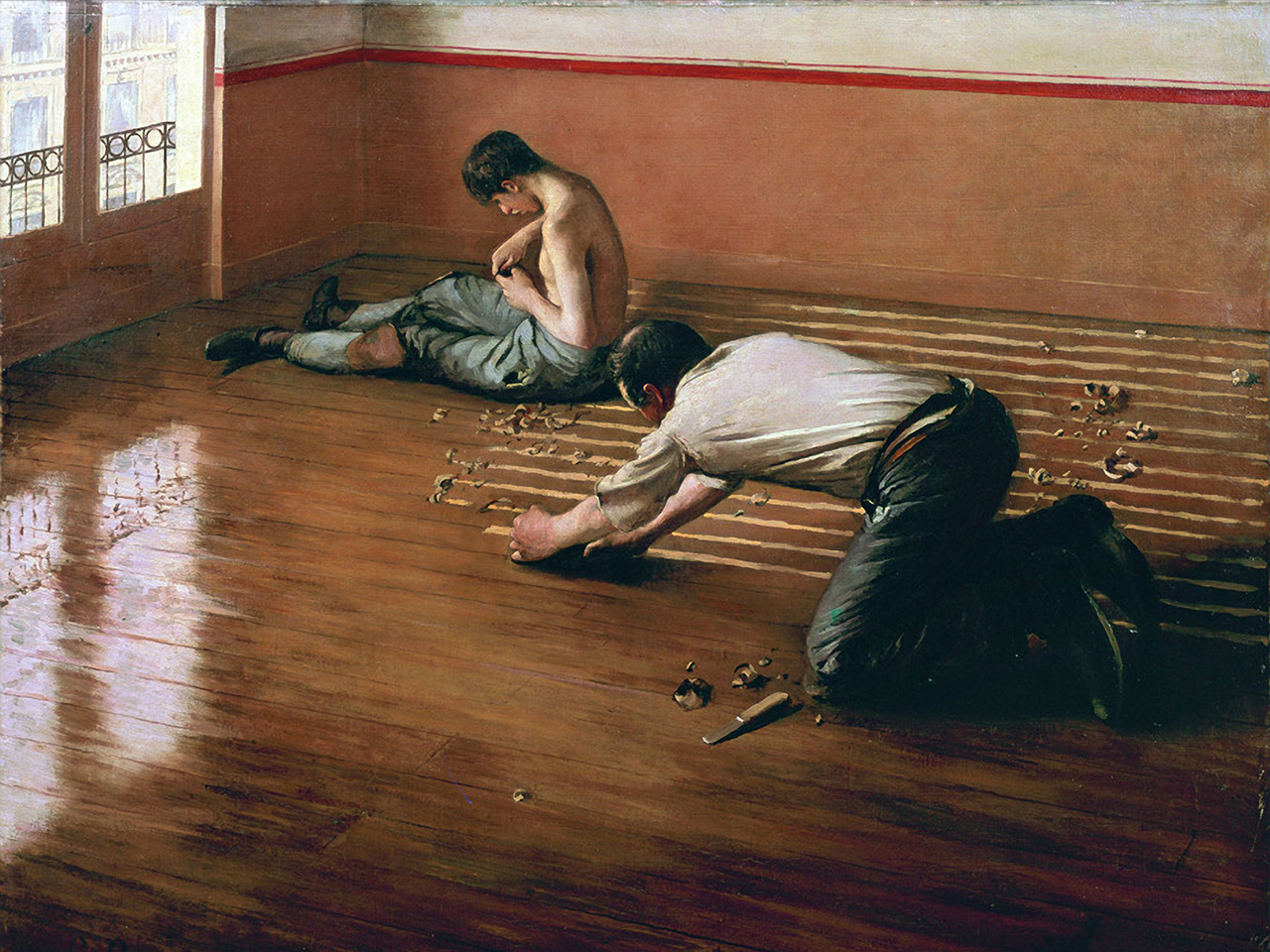 The emergence of the use of timber in the construction of floors can be dated by some estimates to the dawn of the second millennium B.C.E. during the Bronze Age. In the Near Eastern kingdom of Mari the archaeological record reveals a flourishing material culture, which had at its center workshops located in the palace. Royal artisans voraciously utilised timber for a wide range of specialised purposes, from the manufacture of weapons, chariots, and ships to the construction and maintenance of the palace itself. Shortages of timber became fairly commonplace and were felt even among the highest ranks. In one instance repairs on the palace came to a halt as builders awaited the arrival of wooden beams and planks to be used in the reinforcement of walls and floors. It was not long before the scarcity of timber in the Near East contributed to an expanding trade route ranging westward into the Mediterranean.

In Crete, as in the Near East, an almost insatiable appetite for timber existed. The natural resources in Crete, however, far exceeded what Mari's modest forests had been able to provide. Crete capitalised on its abundance of timber and exported enough oak, pine and cedar to establish itself as a major civilisation in the Mediterranean. As Cretan society grew increasingly prosperous, the use of timber expanded into residential construction. Commissioned by the wealthy, carpenters employed generous amounts of timber in the construction of houses that resembled, oddly enough, nineteenth century Swiss chalets. These houses, like others of the era from this region, probably incorporated wooden pillars, ceiling beams and floors. Though heavily concentrated in the most populated urban centers, the pace of construction of both palatial and residential edifices quickened throughout the entire island, and threatened Crete's once vast timber reserves.

By the time of Alexander the Great's reign during the Hellenistic Age in third century B.C.E. Greece, woodworking tools and technology, originally inherited from the Egyptians, were further refined. The Greeks were proficient carpenters who made significant improvements and innovations in double-handled saws, planes, adzes, files, lathes, glues and veneers. Greek architectons, which meant "chief builder" and from which we derive the word architect, developed ingenious ways to maximise the benefits that wood floors had to offer. Oil and beeswax protected wood floors against dust, dirt and water. Another important development was the introduction of alum-soaked wood, which greatly reduced flammability. With these advances the Greeks improved not only the functionality of wood floors but also the techniques involved in building them.

Throughout the Middle Ages (400 C.E. to 1400 C.E.) the use of timber in floors proliferated throughout the world. Various cultures utilized the many beneficial attributes of wood to overcome a number of climatic problems. In Southeast Asia and in the Polynesian islands, elevated wood floors made of lashed bamboo or joined slats of indigenous hardwood protected against a ground soaked with heavy rainfall. From as early as 600 C.E. traditional Japanese architecture implemented the use of suspended wood planks on crossbeams and pillars approximately two and a half feet (seventy-five centimeters) tall. The elevation separated the floor from the cold earth during the winter and served as an effective ventilation system during the summer. In fifteenth century Germany wood floors were also employed with great success as an effective defence against the cold. Further north in Scandinavia and the Alps, living rooms with wood floors were raised off the snow cover as an added measure of insulation. Indeed, the use of wood floors was as diverse as the peoples who had adapted them for their particular needs.

The early European wood floors were nothing more than roughly hewn planks or beams arranged in a manner not unlike the deck of a ship. While wood floors were not as easy to maintain as ones made of stone or brick, they were nonetheless warm. Thus, they were commonly found in studies, bedrooms and on upper stories. While the lower floors in many homes were designed from patterns of stone, the upper floors were made of wood planks, approximately a foot in width and often left untreated. Sometimes only the perimeter of rooms consisted of wooden floorboards. These were commonly stained and finished, and were used to frame elaborate carpets or decoratively painted oilcloths, forerunners of linoleum. With some exception and variation, according to indigenous timber availability, floorboards were made from mostly oak, pine, and to a lesser degree elm. These planks were cut in various sizes, sometimes exceeding two feet in width.

By the sixteenth century patterned wood floors called parquet gained currency among wealthy Europeans. Wood, often of contrasting colors, was worked into various patterns and designs, from the simplest to the most complex as fashion dictated. Of French origin, parquet originally meant royal or judicial platform, and referred to the area of the floor in law courts that separated judges and the audience. A secondary meaning, still employed today, referred to a part of the main floor in a theater between the area just in front of the stage and the space directly underneath the rear balcony. The popularity of these intricately designed wood floors would last for more than 200 years. During this period these luxurious wood floors evolved to incorporate a technological sophistication that has prolonged their lives even to this day. This was made possible through the development of new methods of impregnating wood with linseed or poppy seed oil along with beeswax dissolved in turpentine. The surfaces of the floors were covered with gum varnish dissolved in wine spirits and were carefully applied with special pads, sealing and finishing them for generations to come.

From the seventeenth century to the latter half of the eighteenth century, a period roughly equaling the reigns of Louis XIV and Louis XV of France, the popularity of parquet floors reached a fevered pitch. Throughout Western Europe, in France, Italy, Germany, Holland and England, parquet floors were laid in castles, palaces, and the homes of the nobility and the wealthy. Elaborate parquet floors that rivalled those of the French royalty were found further abroad as well, in the palace at Saint Petersburg and in the Nijo Palace in Kyoto, Japan. But with the rise of Classicism during the second half of the eighteenth century, wood floors began to reflect the trend in art. A simpler aesthetic started to gain ascendancy and floor designs eventually returned to the uncomplicated elegance of a previous era.

Meanwhile in colonial America, wood floors were predominately made from pine. These smoothed pine boards were used variously with and without stain, and laid in different widths according to taste and availability of timber. As in years past, the practice of painting various patterns on the surface of the wood floors continued. Some of these elaborate designs were used in conjunction with oilcloths which were themselves frequently painted in check and diamond patterns. These decorative wood floors were often laid in, but not limited to, hallways, dining rooms and parlors. Throughout the nineteenth century in America pine remained the most popular choice for wood floors for a variety of reasons. Easily accessible and affordable, pine could be stained to create the illusory appearance of darker and more expensive wood. Additionally, technological innovations at the end of the century in the manufacturing of prefabricated parquet floors made available to the common person a decorative aesthetic formerly enjoyed by only the wealthy. In these instances the pine floors served as the base upon which the prefabricated layers of parquet were laid.

American preferences during the first half of the twentieth century favored wood floors made from oak strips rather than planks, often stained and sometimes bordered with parquet. With advances in technology, parquet became an increasingly affordable alternative to more expensive wood floors and its popularity began to grow once again. In 1941 the Swedish firm Kahrs patented a new technique in the manufacture of parquet that consisted of three layers of multi-laminated and glued wood with only the top layer made from high quality timber. Highly successful, this technology accounts for approximately twenty-five percent of the current wood floor market. This cost-effective innovation helped to increase the popularity of wood floors through the Second World War and into the post-war boom years.

While the years between the mid-1950s and the 1970s were largely dominated by affordable carpet, the popularity of wood floors has steadily increased again in the last thirty years. But the need for responsibly managed forests has redoubled efforts to strike a balance between cultivation and conservation. In recent years the use of exotic timber from Africa and Central and South America, resources long abused and depleted during the past century, has decreased. Today, a wide variety of timber species and floor styles is still available thanks to more sustainable sources of timber. While oak remains a favorite, many prefer floors made from maple, beech, birch, cherry, walnut, pine, fir or hickory-pecan. Because new growths can be harvested in a mere five years, the use of bamboo has become more prevalent as well. Comfortable as they are practical, wood floors have been cherished for their incomparable versatility. It is little wonder that their functional and aesthetic charm have made them staples in our homes for some 4,000 years.